This article presents observations on the performance of work related to the commissioning of a new area at the initial stage of investment. Topics covered in the publication describe bad and good practices observed during many years of our experience in the industry. Explanations of installation, operational, and process qualifications have been kept to a minimum. The subject of consideration is a hypothetical new production area that has been added to the structures of an existing pharmaceutical manufacturing plant with technical, quality, production, and administrative staff. A business decision has been made, where the amount of investment, process requirements, and maximum production capacity are known.

The pharmaceutical plant described is an organisationally complex enterprise. It usually includes such areas as production, warehouses, quality control (including microbiological laboratory), quality assurance, technical services, and a wide range of management and administrative staff. At the same time, there are R&D laboratories, registration, sales, marketing, human resources, transport, OHS, IT, and other units operating in the plant. The commissioning of a new manufacturing area relates directly or indirectly to each of the organisational units listed above. However, let us focus on the three main stakeholders of the investment, namely the quality assurance, technical services, and production units. These must meet often imprecisely defined business requirements and have the highest impact on the implementation work. The areas identified contribute significantly to the selection and implementation of practical and detailed solutions that will operate in the plant for years to come and will be subject to inspection by control bodies, both domestic and foreign. Legal requirements are also likely to change during this time. It is therefore extremely important to formally delegate decision-making to those responsible for project implementation. Leaving aside the powers of the project manager supervising the entire project, we should consider giving effective tools to the representatives of the three aforementioned organisational units.

Our observations show that one of the bad practices is giving responsibility to employees while limiting their ability to make crucial decisions. In short, one person makes the decision, while another justifies it, e.g., during an inspection. Thus, clearly defined responsibilities are of paramount importance. They must be followed by decision-making, which is critical. A simple tool supporting this process is to create a responsibility matrix, which for all planned work defines a person with his/her role in the project. This document can be in the form of a one-page table and should be approved by the top management of the plant to be prioritised. The people listed in the matrix should have specific decision-making powers and responsibilities, which may not necessarily coincide with their existing role in the company. The powers and responsibilities have a significant impact on the success of the overall project. We have observed that at the stage of preparing the responsibility matrix, the selection of individuals or units poses a problem for the label. It is mainly due to the involvement of existing functions in other initiatives carried out in the company. Excessive responsibilities of key employees require delegating their tasks to other employees, often less experienced. It can lead to conflicts of interest, changes in responsibilities, delays in the project, or a greater risk of error. An important consequence of the above actions may be insufficient involvement of competent employees in the first and most important stages of the project, i.e., during the preparation of the following: User Requirements Specification, Detailed Design, and Design Qualification. It is less costly to catch errors and correct them at this stage rather than in the later phases of the project. For example, finding the missing lock required by GMP in the conceptual design is more cost-effective than rebuilding an already constructed area, complete with supporting systems. It saves the developer the expense of dismantling, reworking HVAC, RMS, etc. Also important may be the timely commissioning of the facility, which may be delayed due to subsequent room shutdowns associated with the introduction of new changes.

In our opinion, the User Requirement Specification (URS) is the most important document in the project. This document must be created by competent people, mainly from manufacturing, quality assurance and technical services, and other areas.

The User Requirement Specification should clearly define as many detailed requirements as possible for the new facility, taking into account the standards and solutions already used and proven in the plant. It is the responsibility of the production representative to determine the requirements for the ease of logical and efficient execution of planned production activities, of which the following can be distinguished: the layout of the various rooms, the indication of the required supply utilities, and the selection of space to allow work at the highest production occupancy. The role of the quality assurance representative is to specify the requirements for which the area will meet current legislation and regulations that may arise in later years. It is essential that the individual carrying out this task be familiar not only with the formal legislative requirements but also with the latest GMP trends. Determining the general requirements for the area qualification processes is also the responsibility of the quality assurance area. The representative of technical services should consider the User Requirement Specification the applicable manufacturing or other standards, which result in a high probability of failure-free operation of equipment and systems. The representative should especially be mindful of the existing auxiliary systems to which the new elements of the applied technology and branch solutions will be connected. In the document, it is important to provide specific requirements especially for important elements (e.g., the accuracy of the ACP in the RMS). Besides the above functions, it is worthwhile for the document to be reviewed by other services, i.e., OHS, Fire Safety, and IT. It is an SOP to create several versions of the User Requirements Specification and this results from new ideas as well as from the development of the concept of the addressed issue (e.g. during meetings with potential suppliers, contractors). A well-constructed User Requirements Specification establishes the basis for the creation of the conceptual and detailed design by design companies.

The next step is the process of creating the Detailed Design, based on the delivered User Requirements Specification. This stage is intended for clarification of specific technological and organisational solutions. During the process, ongoing consultations between the external designers and representatives of the plant are necessary. Each of the investor’s representatives should ensure that the executive design meets at least the minimum requirements. The role of the representatives is to consult with other employees in their areas who will in the future be involved in qualification, operation, and maintenance of the new area.

We are referring to qualification workers, production leaders, automation workers, and maintenance workers, who have the best competence to evaluate the project accurately. The competent knowledge of these people in their disciplines provides a unique opportunity to verify the correctness of design assumptions. By the way, catching a problem by a line worker or applying his idea in the investment can be motivating for him. It is worthwhile to provide all checkers with an appropriate amount of time. The summary of this phase of the project should be the delivered project documentation, involving all branches, e.g., architecture, construction, sanitary, and electrical.

The next stage of the project is the design qualification (DQ), during which the compliance of the project with the user requirements (URS) and GMP is checked. The organisation and creation of the protocol (DQ) is usually the responsibility of the quality assurance unit. The design check should be performed by industry specialists with appropriate competencies. An example would be the verification of electrical design compliance with user requirements (URS) and industry requirements. Such a task is better delegated to an electrical engineer than to someone working in the QA department. The technical aspects of the design of a low voltage installation will also be better assessed by an automation engineer, as he or she will be responsible for the maintenance of the installation over the following years. The opinion of OHS staff can be equally important at this stage. Passing the qualification forces a greater commitment of the people involved in the project and increases awareness for the future functioning of the new scope. Validation of the Design Qualification (DQ) test step should be done by the person responsible for the scope.

The following part of the article will describe the successive stages of project implementation in terms of organisation and decision-making (technical details and good practices have been omitted). At the initial execution stage, it is recommended to use Installation Qualification (IQ) protocols for the premises and systems to be qualified. That allows the correct execution of the IQ tests and to verify the contractor’s work and design compliance. Auxiliary installations are also verified for quality and correctness of execution. It is possible, for example, to verify the quality, routes, slopes, or dead legs of auxiliary installations. Thus, the introduction of an efficient project change management system must be of paramount importance. Before its implementation, any significant change should first be approved by the designer who will confirm there is no impact on other elements of the design. Subsequent approval should be by the quality assurance area, which will confirm that there is no impact on further DQ stages, the technical services, which will determine that the change does not degrade their accepted standards, and production, which will confirm that the change does not affect the correct functioning of the area. Inspectors and auditors often verify changes during the installation of a new area. Only this practice allows changes to be implemented correctly without unchecked solutions. Such an approach increases the awareness of technical services in the later stages of using the area and increases technical knowledge among representatives of other parties of the manufacturer. Controlling changes forces the development of solutions that will meet the users’ requirements and will clearly define the position of the investor concerning the contractor. An additional benefit of the tool is the reduction of decision-making shortcuts resulting from quick arrangements between the investor’s technical services and the contractor’s employees. Importantly, there is a natural understanding they possess (the same industry, the same schools, similar professional problems, great awareness of industry requirements, e.g., UDT, and often also a great reluctance to formal documentation enforced by pharmaceutical law and GMP trends). Following the above recommendations should minimise the number of situations where a person influencing decisions on installation work is not accountable for their findings. The summary of the IQ should include complete as-built documentation reflecting the actual state of all introduced changes.

In conclusion, the first preparatory work for introducing new manufacturing areas in the pharmaceutical industry is crucial because, at this stage of the project, changes resulting from carelessness or errors can be easily eliminated without large financial outlays. The later the non-compliance is found, the more severe its removal may prove in terms of costs while significantly prolonging the project deadline.

Therefore, it is worth ensuring adequate human resources from the very beginning of investment planning. It is a mistake to prepare the first version of the documentation (URS and DQ) while advancing the execution works due to the high probability of non-compliance, the elimination of which will be difficult to implement. 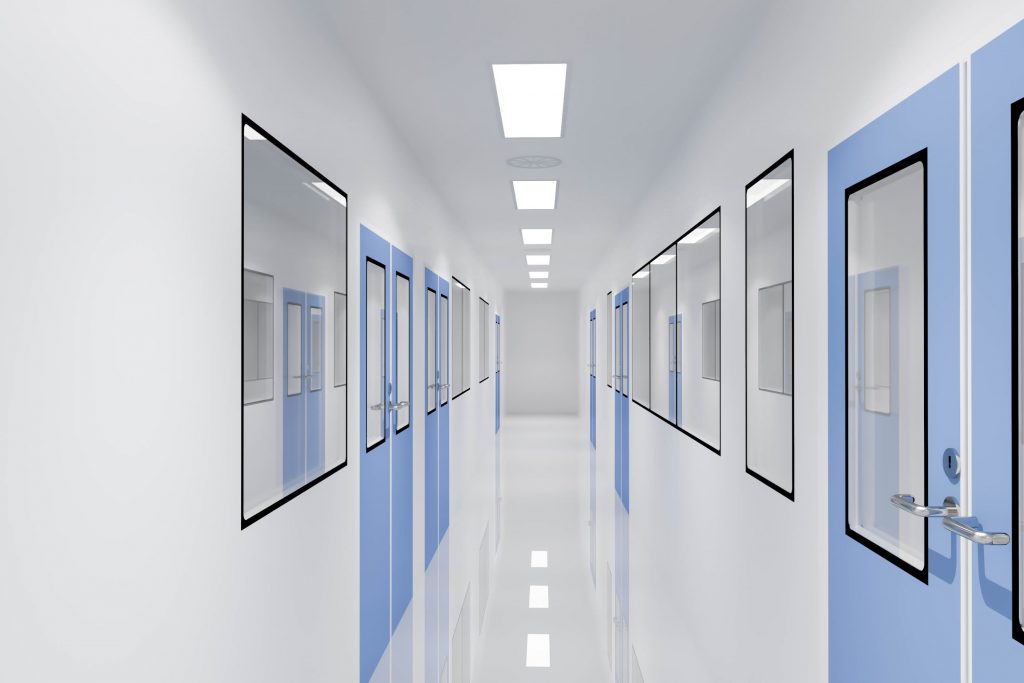